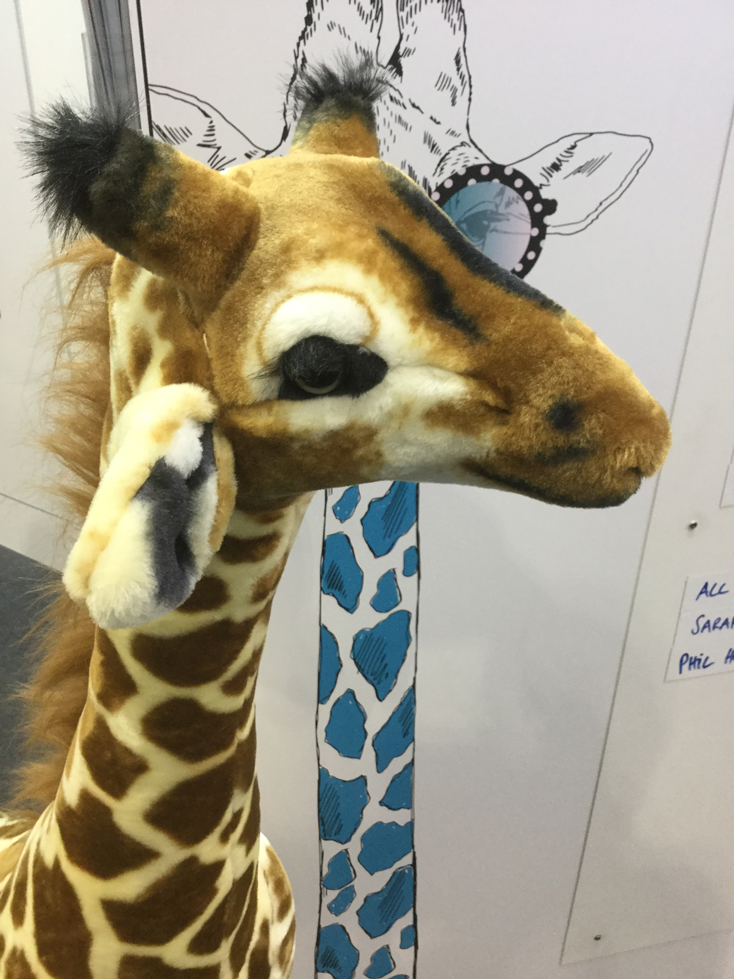 Gertie the Giraffe & The Buzzwire Challenge!

Whenever we go to a major conference we don’t just bring along our expertise and technical knowledge, we also bring along our gauntlet of dexterity and focus – The Buzzwire Challenge! Many have faced the twisting, unwieldy trial, but few succeed. Those who do complete it are placed onto our leaderboard, where everyone is competing to be on top by the end of the show to win Gertie the Giraffe!

Gertie stands at and impressive 4.7ft and has been won by people from all over the world, and even if you don’t get the fastest time you still get to go home with a baby Gertie. You can view our all-time leaderboard below for an idea of how quickly people have managed to complete the challenge and find out where previous Gertie’s have ended up. Want a chance to win Gertie? Then keep an eye on our twitter and LinkedIn for upcoming events! We’ll also post here with details of our next event, so keep an eye out!

Got a question for Gertie? Click the button below to ask her!

When Moin took his first attempt at the buzzwire we immediately knew that he was going to win Gertie. What we didn’t know was that after returning to show his manager that he did in fact beat the buzzwire he managed to do it again, only this time in a time so fast it smashed every record in existence, by doing it in a unparalleled 14 seconds.

As an owner of a large Anaerobic Digestion facility, David had recently opened a new plant that was to be run by his daughter, and he realised that Gertie would be the perfect supervisor to ensure everything was operating well at the plant.

Blowing everyone out of the water with a time that has yet to be bested, Will’s quest to win Gertie was motivated by knowing that back home in Nantwich his 7 year old daughter would be delighted to receive a massive plush giraffe. It’s fair to say that Will had “a few goes” before mastering the wire, but his fast and loose technique meant that he never set the bell off.

Sarah manage to win Gertie on our trip to London in 2016 after mastering the buzzwire game at a time that was nearly 5 seconds quicker than any previous contestant. Gertie’s journey back with Sarah was quite the expedition, with the necessity to crane her neck as she travelled on the London Underground to her new home.

Want to follow Gertie at our conferences? Check out our hashtag #gertiethegiraffe

The Re-homing of Gertie the Giraffe

As it happens, there were a couple of Gertie the Giraffes left over in the herd. Rather than relaunching the ‘beat the buzzer’ competition, we decided to say farewell to Gertie by choosing him the perfect home through our re-homing appeal. It was Christmas time, after all.

We were overwhelmed with the responses we received. There were some genuine, heartfelt pleads to temp Gertie to all corners of the country. There were also some very creative and humorous entries, but there were two which stood out. Firstly, this entry stood out thanks to elements of nostalgia, logicality and a prime location.

Bruce Flaws of FES, entered the competition on behalf of his wife, Angela. He scribed the following appeal:

“My wife works at Camphill Blair Drummond, her office window view of the Giraffe & Elephant enclosure at Blair Drummond Safari park. Gertie would get a great view of all her friends and relations and would be well looked after.”

Finally, the other winning appeal came from Jason Reece of Liverpool, in support of ‘Zoe’s Place Baby Hospice’ who declared:

“We would love the children to benefit from seeing Gertie and put a smile on their faces while they go through care and treatment.”

It was a straightforward appeal to the heart and it made perfect sense to send Gertie to help the children in the North West through challenging times. After some research, we soon realised that Zoe’s Place is an exceptional organisation. Moreover, the charity has been recognised for their excellent work by engineering firm Boulting, who have adopted them as their chosen charity for 2018.